Phablets (Phone+Tablets) are getting popularity, thanks to Samsung for coming out with Galaxy Note as the idea. LG is out with its phablet LG Optimus Vu (released as LG Intuition by Verizon) which is getting popularity among the fans of bigger smartphone.

Here is a hands-on review of the LG Optimus Vu covering various aspects of its features, hardware etc.

The LG Optimus Vu is on the larger end of smart phones. It's dimensions are 5.5 inches tall, 3.56 inches wide, 0.33 inches thick, and weighs in at 6.08 ounces. The design features a 3.5mm headphone jack, a QuickClip for QuickMemo, a Micro-USB power port, and physical buttons for power and volume. There are also four touch sensitive buttons for back, home, recent apps, and menu. 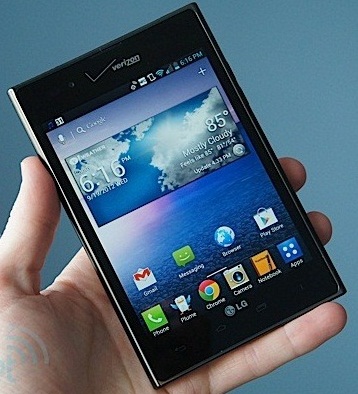 LG Intuition has a 5 inch IPS display with Gorilla Glass, a wide viewing angle, and a resolution of 1024x768 pixels which supports 16M colors. So, you can enjoy your HD videos in great quality. The screen is bright which works nice outside.

The 1.5 GHz dual-core central processing unit gives the Optimus Vu decent speed and performance, with just a slight lag at sometimes when navigating the phone or switching from app to app.

LG Optimus Vu got 32GB on-board memory with no option of external memory card slot. The RAM is just 1GB which is a bit less and you will feel a bit lag while playing games with heavy graphics.

The sound and call quality is good, but the Optimus Vu's speaker is rather poor. The 2,080mAh battery boasts a ten hour life span and performs pretty well for average user.

The LG Optimus Vu gives the user seven home screens to organize their apps, downloads, and widgets. Icons are customizable according to the needs of the user. It comes with lots of lots pre-loaded apps and features. The basics apps like email, calendar, news, weather update, clock, calculator, and more are included. Google loads the Intuition with apps like Gmail, Google+, Messenger, Latitude, Maps with Navigation, Play Store, Search, Talk, and YouTube.

In the LG Intuition, the Verizon version of the Optimus Vu, Verizon adds their own apps as well. These include MyVerizon Mobile, Viewdini, VZ Navigator, and the ability to be a mobile wireless hotspot. Amazon contributes their Kindle, Share, and Music apps and store. Other third party apps pre-loaded on the Intuition include IMDb, Zappos, Audible, SmartShare, FileShare, NFL Mobile, Polaris Office, and Slacker Radio. 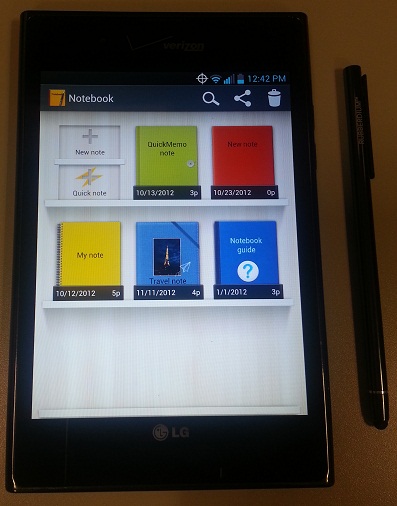 Another cool app is the QuickMemo app with stylus, or Rubberdium Pen. As you can easily get the idea, it is something similar to the S-Pen of the Samsung Galaxy Note. This app allows the user to take notes or draw sketches using their fingers or the pen. LG Tag+ is another nice app automating certain functions to make the phone easier to use and navigate.

It also has 4 image sizes and lots of scene modes, effects, and options. The camera can record videos up to 1080p HD. LG Optimus Vu has a 1.3MP front facing camera too, with a lot of the same functions and features as the rear facing camera.

Why you should buy LG Optimus Vu (LG Intuition)

And why you should not :

It is a very large phone, has no place to hold the stylus pen, and there is some lag which you can experience on this phone.