Indian Premier League is back again for the lovers of cricket. IPL 6 is going to be started on 3rd April, 2013 and the last match of the IPL 6 will be on 26th May, 2013. This time 9 teams are participating in the IPL 2013 and a total of 76 matches will be played across the 12 venues in India.

The opening ceremony of the IPL 2013 will be held on 2nd April, 2013 in which international artist PitBull and many Bollywood celebrities like Shah Rukh Khan, Katrina Kaif, Deepika Padukone etc are going to perform. 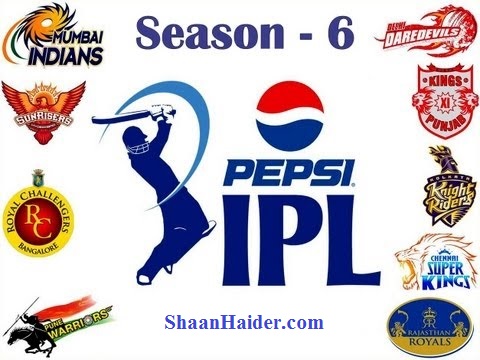 The IPL 6 2013 will be broadcast live on many of the TV channels. But if you are not going to be the places like office, college etc where you will not have the access to the TV set then, you can watch the live stream of the IPL 2013 matches online on your computer.

I am sharing a video player below on which you can watch the IPL 2013 matches and opening ceremony live stream online. The video feed is supported. So if an ad appears on the video player, just click on the "X" mark to close it. Also, the entire schedule of the IPL 2013 matches is given below the live stream channel. You can use it to keep track of the matches of all your favorite teams in the IPL 6 this year.

There are also links given below the IPL 2013 match schedule of other sites which will provide the IPL 6 live stream. So, you can also use any of them to watch your favorite team playing in IPL 6 2013.

YouTube.com/indiatimes - This is the official YouTube channel for the live streaming of the IPL matches powered by the IndiaTimes. But you may find it unavailable to you if you are accessing it locations like USA, Canada etc. In that case, you can use any of these free VPN services to access the blocked content.

youtube.com/willow - It is also a YouTube channel on which you can watch the IPL 2013 live stream. But it is a paid service.