Why Samsung Galaxy S5 is Better than the iPhone 5S (Video)

We all know that Apple is very aggressive when it comes to copyright fights with other brands, or in making ads to make fun of products of other brands. Usually it happens between the Apple and Samsung as these are the two biggest brands of the smartphone and tablets in the world right now.

Earlier we have seen lots of ads by Apple and Samsung making fun of each other. It is specially funny because Apple buys many hardware components from Samsung and then portrays Samsung products as cheap and files cases on Samsung about copyright infringements. In reply of all these, Samsung also comes out with ads claiming that Samsung products are better than the Apple products. 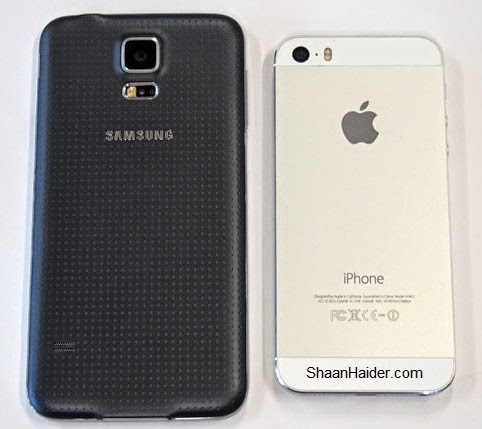 And once again Samsung is out with a series of videos showing why Samsung Galaxy S5 is better than the Apple iPhone 5S. It is a very high time as Samsung Galaxy S5 is launched recently and rumors of iPhone 6 are in the air already. Also, LG G3 is going to be launched on 27th May and Note 4 will come out hopefully in September. So, Samsung is going to try to sell Galaxy S5 as much as possible before any major smartphone hit the market.

Samsung already broke the selling records of the iPhone 5S and with the help of these latest videos showing the comparison of Samsung Galaxy S5 with iPhone 5S, Samsung is going to try to convince more consumers to buy the Samsung Galaxy S5.

Unlike the previous rivalry videos and ads making fun of each other, Samsung’s presentation is quite decent and convincing. The first video talks about the new and improved camera of the Samsung Galaxy S5 and its fake bokeh effect. The next video is about the big, bright and beautiful Super AMOLED screen of Samsung Galaxy S5 and how it offers more clarity, more pixels and real estate in terms of size with respect to the iPhone 5S.

The next video shows the details and features of the S Health application and its benefits which is one of the highlighted feature of the Samsung Galaxy S5. The last video is all about the new Ultra Power Saving Mode and how it can help you having longer battery life on your Samsung Galaxy S5.

All these Samsung Galaxy S5 and iPhone 5S comparison videos are embedded below. Watch them and feel free to share your views in the Comments section after the post.