Infinix Hot Note X551 is the latest smartphone from the Infinix Mobility which comes with a huge 4000mAh battery and some good hardware specs. We are using the Infinix Hot Note since last few weeks and we have already posted few videos of it on our YouTube channel. 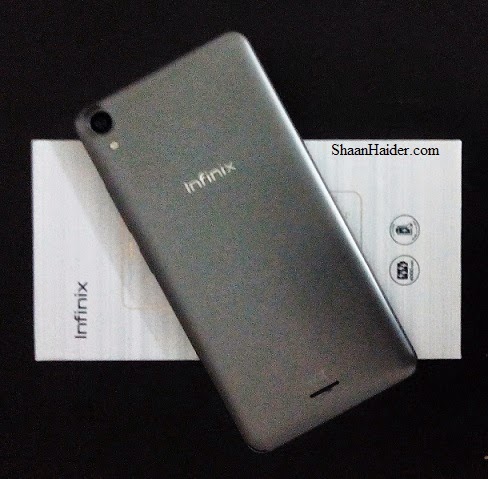 You can watch our Infinix Hot Note X551 unboxing video below.

Infinix Hot Note X551 is having a nice design which looks kind of unibody even though it is not. The front side of the device is having the 2 MP front camera, sensors, three capacitive navigational keys along with the 5.5 inch screen. The volume rockers and power on/off keys are on the right and there is no key on the left.

The primary camera is on the top left corner of the back of the Infinix Hot Note X551 and the LED flash is right below it. The beautiful metallic Infinix logo is in the middle which shines and looks nice. Speaker is at the bottom and there is a small HOT branding just above it. One of the best thing about the design of Infinix Hot Note X551 is that it is comparatively slim and lightweight sporting a huge battery. The device fits well in hand too and using it with one hand is pretty easy.

Hot Note is available in four colors which are Anthracite Grey, Copper Brown, Champagne Gold, and Mint Green. All of them are nice but the Mint Green is just too shiny and flashy and I would avoid it. The back panel is removable but the battery is non-removable. So you can change the back panel with a different color if you want but I would not prefer it as the sides of the device will still have its original color on it.

Infinix Hot Note X551 comes with Mediatek Octa-Core 1.4 GHz processor, 1GB of RAM and Mali 450 GPU. Though the RAM is just 1GB in this device, it performs pretty well for multitasking and supporting heavy games and apps. Considering the price, it is justified too. Still, it would be better to have 2GB of RAM in this device.

The Android version used in Infinix Hot Note X551 is Android 4.4.2 Kitkat which is quite old now and it would be better if it came with the Android Lollipop. The internal memory is 16GB out of which around 12GB is user available memory. There is also a memory card slot which you can use to expand the memory and it supports up to 32 GB of microSD cards.

Infinix Hot Note X551 comes with a 5.5 inch 720p HD IPS screen. The screen is not having any kind of protection like Gorilla Glass etc. So, it is advisable to use a screen protector to protect the screen from scratches. The screen is very prone to finger prints and easily gets lots of them after using for few minutes only. So again it is better to use a nice screen protector to get rid of this issue.

In terms of quality, the screen and display is good. Though 720p HD screen is not great for a 5.5 inch screen smartphone, Infinix Hot Note is having a comparatively better screen with the PPI it supports. The display is sharp and images appear crisp on it. Viewing angles are good as well.

Brightness is good and the sunlight readability is good in full brightness. The lowest brightness is very low which is good if you use your smartphone at night before going to bed or on bed. Overall the display quality of Infinix Hot Note X551 is good. Though the low specs are justified considering the price, it would be great to have a Gorilla Glass protection and 1080 full HD screen.

Infinix Hot Note comes with a 8MP primary camera having OV8865 image sensor and 2MP front facing camera. The primary camera supports 1080p video recording. Images coming out of the primary camera are good in quality if not so great. Specially while taken in the outdoors and sunlight, the images are very detailed. Autofocus is fast and the HDR mode works pretty well too.

When it comes to entertainment. Infinix Hot Note performs really well. The 5.5-inch 720p HD screen is good for watching movies. The speaker is loud and provides clear output for you to enjoy the music and movies. The music app is well designed but the sound from the earphones are not that great.

For gaming also, Hot Note is a good device. The combination of the big and bright screen, good quality speaker, high performance processor and GPU, smooth and responsive sensors deliver a very nice gaming experience. You can watch our gaming performance test video of Infinix Hot Note X551 below.

Infinix Hot Note X551 comes with lots of nice apps like Swift Keyboard, Google apps, Kingsoft Office and lots of nice Gesture Control settings for better productivity on your smartphone. Gesture Control let you open an app directly by making a specific gesture on the screen while the screen is locked which is really a time saving feature.

Now finally, let’s talk about the most hyped feature of Infinix Hot Note X551. The device comes with a huge 4000 mAh non-removable battery. The performance of the battery is really nice and it easily stands for one and half day with moderate usage. There is also a Power Saving Management app which comes with multiple options to increase the battery life restricting the usage and functionality.

As mentioned above, Infinix Hot Note X551 comes with 3A output charger for the super fast charging feature. According to Infinix, you can charge Hot Note battery upto 75% in just an hour and just 20 minutes of charging will give you 7 hours of battery life. Though we did not get the exact same timeframe in our battery test, the 3A charger indeed charges the huge 4000 mAh battery real fast and battery lasts long.

Infinix Hot Note X551 is a nice budget Android smartphone which comes with high end hardware specs, great battery performance, interesting camera features, beautiful design at a very competitive price in this segment. If you are a smartphone user who wants a good performance from the phone without making holes in your pocket, Infinix Hot Note X551 is the best option for you.