Since long people were waiting for the official launch date of the Huawei Mate 10 as lots of interesting information regarding the device was coming out. Recently few Huawei officials also mentioned about the device in their interviews increasing the curiosity about the Mate 10.

And now Huawei has started sending the Mate 10 launch event invites officially. The event is scheduled to be held on October 16, 2017 in Munich, Germany. 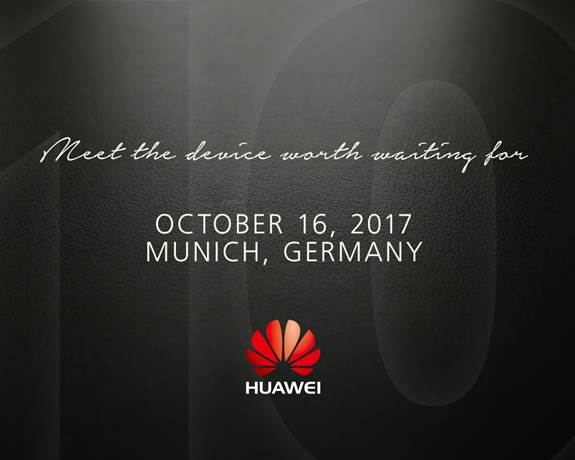 The invitation itself doesn’t reveal much information about the device or the name of it event. But in the background a big 10 is clearly visible along with the words “Meet the Device Worth Waiting For”, giving the hint that it is going to be the Huawei Mate 10.

The background on which 10 is shown looks like the retail box of the device as the last year's Huawei Mate 9 also came in a black, beautiful box.

According to leaked information and the inputs from Huawei CEO earlier, Huawei Mate 10 is going to come with bezel-less all-screen display, HiSilicon Kirin 970 processor, better battery life with quicker battery charging. According to Huawei CEO, Mate 10 will be better than the upcoming Apple iPhone 8 in terms of performance.

It is also rumored that Huawei Mate 10 will be a Google Project Tango-based smartphone and will come with AR (Augmented Reality) capability.

Soon, we will find out about all the hardware specs and features of the Huawei Mate 10 once it is announced officially.