OPPO has announced that it is going to sponsor the PlayerUnknown's Battlegrounds Mobile championship in the Middle East and North Africa region, for the upcoming PUBG MOBILE x OPPO MENA Challenger Cup.

The event will be attended and participated by region’s best players to battle with each other to reach the Finale match, held from May 29-30 2019. 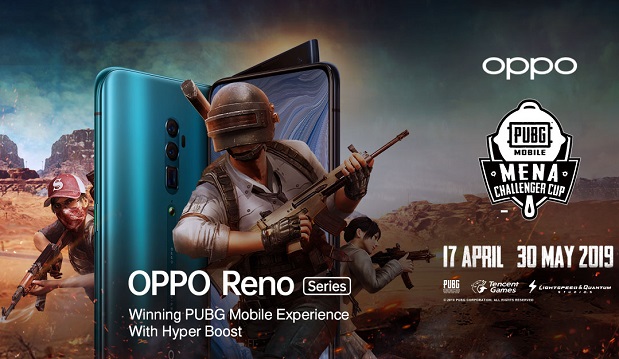 Players from all over the MENA region including the GCC, Morocco and Egypt are currently preparing for the PUBG MOBILE x OPPO MENA Challenger Cup Semi-Final elimination rounds that will take place from May 12-23.

There will be a live stream available of the event on YouTube where fans of Esports will be able to watch the live action.

Recently at the OPPO Reno series smartphones launching, OPPO also unveiled that they have worked with PUBH Mobile to improve the performance of the game on their latest flagship with Game Boost 2.0, Touch Boost and Frame Boost featutes.

Given the popularity and competitiveness of mobile gaming in today’s world, there was a clear need to develop a smartphone that gives players the best possible experience whenever and wherever they want to play their game of choice.

We believe that the new OPPO Reno Series provides players with the ideal platform on which to play PUBG MOBILE; after all, when it comes to immersive games and competition, smartphone performance is equally as important as player skill.

PUBG MOBILE is committed to provide a fun in-game environment and to support the development of a sustainable ecosystem for eSports enthusiasts. Leveraging our experience in eSports, we hope to bring that very expertise to the region to enhance the ever-growing mobile gaming landscape.

We’re thrilled to welcome OPPO on board as a partner for the MENA regional PUBGM championship. In Esport, your device is everything – and OPPO has proven yet again, with its Reno smartphone series, that it knows exactly what mobile gamers need in order to succeed. With regional teams preparing to battle it out in the coming month we’re looking forward to some exciting action.