HOW TO : Completely Uninstall Applications on Mac OS X


In today’s IT world, Mac OS X is not as popular as Windows is. All Mac users have to confess: there is no any chance for Mac OS X to compete in popularity with Microsoft’s product. Not that it is better – it turned out to be rather universal, and this helps users to install it practically on any machine without problems, while Mac OS X can only be installed onto a certain hardware with certain configuration (that’s why, probably, our beloved Mac OS X is still not available here and there – like unlicensed copies of Windows are). The universality of Windows OS plays actually a bad trick upon its users and Microsoft developers – because the amount of users who use Windows illegally is still literally enormous.

Lately our research team has to Russia, and there you can hardly find a human that has a personal computer featuring a LICENSED Windows on its HDD. And, in some respect, we can understand them – what is the use of paying money for something you can download from Internet for free (taking into account, that the cash you have to pay there for licensed copy of Windows is really huge for an average citizen)? Apple hasn’t got such a problem – Mac OS X is free, but it can only be installed onto Apple-configured computers, sold only by Apple - what makes it senseless to crack it.

Actually, both operating systems have their own pros and cons, but today we are going to speak about that one which is not an advantage of Mac users – an uninstall utility. Somehow (well there is a strong suspicion that it’s not accidentally) Apple developers have “forgotten” to write an uninstallation utility for Mac OS, and that became a real headache for a great deal of users. Taking into account, what amount of application a general user usually installs/uninstalls every week, we can surely say that this is a serious minus in Mac OS in general. 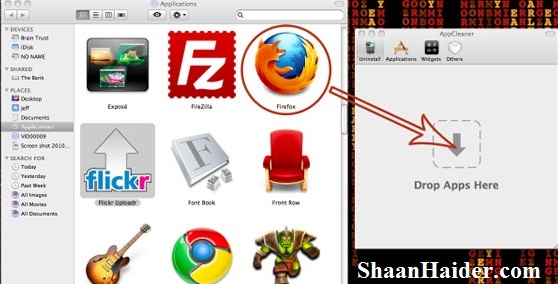 Unfortunately, the problem is also as follows: after dragging an application to the trash bin, the problem of uninstalling is not solved at all. There are a lot of additional temporary and adjustment files that continue to garbage your HDD and that ultimately lead to slow performance after a few months of active installation/uninstallation process. These files do not disappear, they are in your system, and if you do use your Mac actively, it’s time to think about the proper solution to this problem.

In Windows the solution is really simple – you can use in-built system tools for these purposes, and though they are not that good, they partially save you from such issues. Unfortunately, in Mac we have only one decision of this question – we have to use third-party software.

Most popular representatives of such Mac uninstall software are given below:

Top 5 Mac Applications which You Can't Get on PC

A successful decision for uninstalling unwanted programs and their temporary files. It’s rather easy to use and quick to perform searches because of its inbuilt search engine. Ready to work on Mountain Lion, what’s important.

A very easy and straightforward solution, that works in the background until you drag something to the trash bin. Asks for your permission to delete all the associated files. Nice solution for people who don’t have much time to waste on uninstallation process.

A solution for Mac owners, presented as all-in-one tool for Mac maintenance. Involves an antivirus software, an expanded uninstall tool and a few other features. A good solution for those who want to save money, but are still eager to have a Mac multi-tool at hand.

A great solution for really active users. Much like AppTrap, waits in the background for you to drag and drop an unwanted application to the trash bin. Works quickly and effectively.

Of course, there is a bunch of other applications for Mac uninstalls, but these ones are the most argued and popular on the web, and they are the ones I tried myself. It’s hard to decide which one is the best, because they all have certain pros and cons.

Being an advocate of technology development Tamika puts a lot of writing efforts into distributing information on latest achievements of IT and computer engineering. She is gradually developing good relationships with different market operators like MacKeeper.Zeobit.com and gains recognition as a technology writer. Her hobbies include book reading and foot travel.


Posted by Shaan Haider
Categories : How To :, Mac, Softwares