A practical joke is one thing, but this stuff? This is serious, this ‘prank equipment’ is for the seriously messed up prankster who can’t tell the difference between a harmless practical joke and sociopathic tendencies. 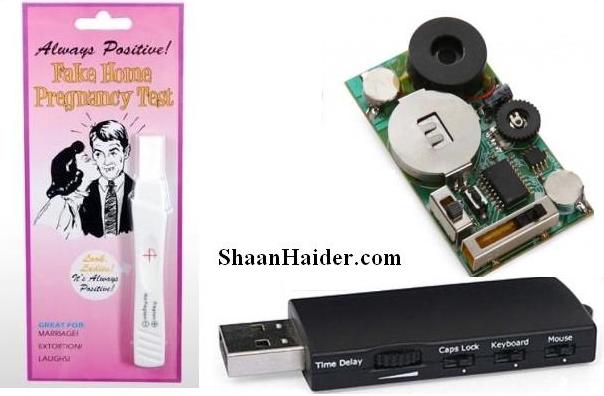 This kind of device was originally developed to be used as a kind of alternative crowd control mechanism. Branded as a non violent method of crowd dispersal it will leave your victim with headaches, nausea, loss of balance and have them vomiting uncontrollably, but it’s not violent, no. Despite it being military grade technology it has of course been stolen and remarked as a prank or gag item. If works by emitting a series of sound waves that have been shown to cause symptoms of distress in humans, and is small enough to easily conceal and available online if you know where to look. Sounds like fun, right?

7 Best Gadgets and Accessories for the Working Geek

3 Awesome Computer Pranks To Pull in your Buddy’s Cubicle

Yet another small and inconspicuous device that will make the focus of your malicious attentions believe that their PC or laptop has been targeted by a virus. This plain looking USB device has various ways of crippling a hard drive just as though the machine has been attacked by a particularly nasty virus. Can’t you just see the victims of this one crying with laughter? No?

A Wrong Number Every Time

This little device does exactly as its name suggests, the wrong number generator basically generates a wrong number every time you dial out on your phone. This not only upsets the guy who’s phone you’ve installed it on, but everyone who gets a wrong number call from him too. Unfortunately until it is removed every time you try and call out you will get the same thing, unless of course you have made use of the facility that allows around a quarter of the calls to make it to the right destination. And the comedy factor comes in where exactly?

This little box cuts off the reception of every mobile phone in its immediate surrounding area. Why is it funny? No idea, but boy do they sell, under the counter of course as they are oh so just a little bit illegal. Cunningly disguised as a cigarette packet it will slip easily into the pocket on your shirt and will knock out any phone within a 32ft radius of your location. This is not only a bad prank, it’s also a dangerous one as emergency signals can also be blocked.

4 Must Have Geeky USB Desktop Gadgets

Oh how hilarious! How to make or break a relationship with one bit of cheap comedy plastic, especially for those relationships that are built on a foundation of deceit and fakery apparently. It looks like a standard pregnancy test and gives a positive result every time. Can be used to force him to stay with you for the sake of a non-existent baby, or scare the crap out of him and make him leave. As if a real pregnancy test wasn’t enough fun!

Looking to find IT support in Manchester? It's not always the most easy of tasks - call EverythingTech.co.uk