Top 5 Reasons Why Android is (Much) Better than Apple iOS


There is a culture war going on right now that has been going on since the early eighties. On one side of this war are those who use Apple products and on the other side is everyone else. This battlefield of this war has long been the personal computers where the Windows and Mac users are fighting, but with the increase in use of mobile devices such as cell phones and tablets, this war has found a new battleground and is raging just as strongly there as it ever did on our desktops.

The iPhone burst onto the scene a few years ago and was a true masterpiece of technology. The iPhone could do more and do it faster than any other cell phone on the market. For this reason, iPhone quickly became the leader in the smart phone market. However, while Apple got a head start, a new challenger has arisen and is quickly becoming an even more dominant force in the world of mobile devices and this challenger is Android. 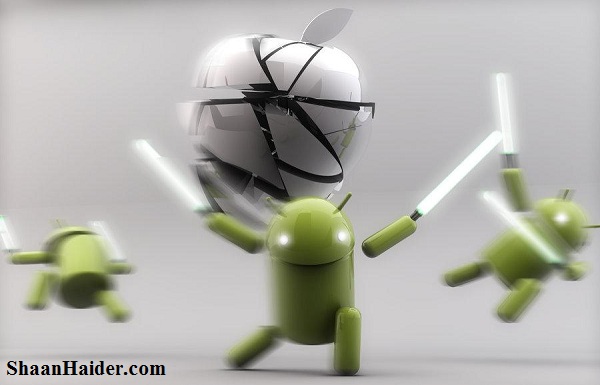 Why Android is Better than Apple iPhone

While Apple definitely got a head start in the smart phone arms race, it has and probably will always have a problem appealing to most of the tech users out there. The main reason for this is that while Apple has branded itself very well, it has branded itself to well. For whatever reason Apple is often seen as unfriendly product when it comes to compatibility. While the truth is iOS runs very well and is a solid platform, it is only used by Apple and won't ever show up in any device that is not created by Apple.

On the other hand Android is almost the complete opposite. Android is seen by almost everyone as a user friendly platform that will play well with others. This means that most people feel they can buy an Android device and use it with any other device they want and not have to worry about Android not wanting to be friends. Because of this image Android simply is going to be used by more people which makes it a lot better than iOS.

The Evolution of iPhone (Infographic)

The History of Android OS (Infographic)

While this fact was touched on a bit already the fact is that iOS is a proprietary operating system. What this means is that iOS will only work with products that it has already been designed to work with. While this keeps iOS out of the hands of Apple's competitors, it also limits what iOS can do.

On the other side of the coin is Android and its open source coding. Open source means that anyone with the knowhow can make changes to the basic functions and capabilities of what Android does. This not only means that app developers can work more easily with Android, but also means that anyone with an interest can potentially create a huge breakthrough in how Android works. When you stop to think about the fact that millions of people can work together to make Android better while Apple remains chained to itself, it's not hard to see why again Android is a better system to use.


Easier to make Apps for

One of the reasons that smart phones have been so successful is because of the massive number of apps that they have access to. While iOS is a good platform to make apps with, it can actually be quite hard to learn and even harder to work with. Apple has not been friendly with releasing much information about iOS and how it works, which can be frustrating when trying to design an app for an iOS based product.

While iOS is a bit unwieldy, the exact opposite of this is true with Android. Android is a very easy platform to work with and doesn't require the in depth knowledge that iOS requires. This means that more people can make apps faster with Android and this again is a better thing to have.

One of the big turn offs for people in regards to Apple products is the price point. While there are definitely people happy to pay for an Apple product, this limits who will actually buy them quite a bit. Because iOS is used in Apple products this by default means that iOS will reach a limited amount of people.

Again Android is almost the exact opposite. Android can be used in almost everything, and for this reason it will appear in products that are half the price of what Apple puts out. While Apple may try to argue that lower price means lower quality, most people don't believe it. This is not to say that Android doesn't appear in higher price products, because it does, which also gives Android a higher price ceiling Because Android isn't bound by a single company, its highly flexible price point means that it will get into the hands of more people faster.

6 Reasons Why Nokia 3310 is Better Than Apple iPhone

All technology needs to evolve to stay relevant or it will get left behind. Think about the fact that more people have cell phones now than have home phones and you will see a great example of this fact everywhere. While iOS will always be evolving because Apple puts resources into this, it can only evolve as fast as those limited resources allow.

Evolution is a much different story with Android. Because Android is open source, this means that people are making changes to what it does every single day. This means that by default Android will evolve faster than Apple and be ready to meet the demands of users before Apple is even aware there is a new demand.

In the end, it's pretty easy to see why Android is a better platform than Apple. It is friendlier with other devices, it is easier to work with, and it can and will change faster. Apple is and always will be a good product, but, it can't keep up with Android and that is just a fact... What do you think about it? Feel free to share your views in the Comments section below.

Rick Simons is a freelance writer for OneClickRoot.com who writes about technology, smartphones, how to root Android safely, and reviews of apps for all operating systems.