Reddit's "IAmA" is a question-and-answer series where (sometimes anonymous) individuals reveal things about themselves that they might not otherwise share. Here are fifteen unique, unusual and the best IamA's from the world of Reddit. 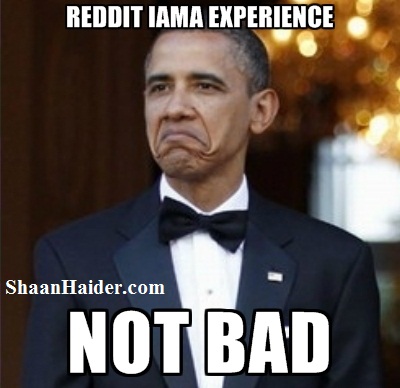 This Redditor suffered from a rare disease also known as Todd's Syndrome, a neurological condition that causes hallucinations, size distortions, micropsia and macropsia. As a child, the Redditor referred to it as "Small Head."

14. "IAmA seventeen-year-old girl who wasn't allowed to talk to people til I was thirteen."

Growing up in a controlling Christian home, this young person wasn't allowed to leave her yard or talk to strangers, because her parents told her her family was "pure" and that the world was dangerous.

13. "I am Kristinn Hrafnsson, official spokesman of Wikileaks."

One of the most popular IamA's, President Obama showed his desire to connect with the internet-savvy generation by conversing with Redditors about matters political.

This housebound man talked about the impact his weight had on his social life, his difficulties with day-to-day routines, and his struggle to lose massive amounts of weight.

10. Scientists and Engineers at NASA's JPL

At the end of the Space Shuttle program, a group of engineers and scientists from NASA gathered to discuss the future of space exploration and the role of the National Aeronautics and Space Administration.

9. "I led the criminal investigation into the Abu Ghraib prisoner abuse scandal."

This anonymous but verified user discussed his investigations into the 2003/2004 allegations of detainee abuse at the Abu Ghraib prison (aka the Baghdad Correctional Facility). The story made the front page of Reddit within hours.

This former career criminal took questions on how to "avoid being hit," whether or not he ever got caught, and how he profited from a life of cat burglary.

7. "I spent 11 months in prison for a crime I did not commit. Had the real criminal not come clean, I'd still be there."

Because of a run of bad luck and what he describes as a "terrible lawyer," this innocent man spent eleven months behind bars. "Jail changed me," he said of his harrowing experience.

Between asking questions about changes in politics and culture, this 101-year-old grandmother said, "The amount of infomation that you kids have is just... great. I never dreamed of having something thats capable of telling you anything you want."


5. "I worked as a full-time servant for an eccentric millionaire."

4. "The government, Interpol and the mob chased my family out of our home country and seized our assets illegally..."

"...my mom, the PM's advisor, stabbed me in the chest repeatedly when I was nine then killed herself." A story that has to be seen to be believed.

This secret atheist discussed his diocese going bankrupt during an abuse scandal, and how they dealt with the political fallout.

This ten-year-veteran of the cable television business answered questions about the future of television. "What's funny is the amount of people who really hate TV for some reason and want to tell me why."

1. "I spent 5 years thinking I was being haunted. It turned out I was just schizophrenic."

"I saw 'demons' in my room as night when I was a kid. Would hear the 'ghosts' talking to me and telling me to do things. A unique look at schizophrenia from the inside.