Top 6 Gadgets People Use to Listen to Music


In the era of consumption, it's all about convenience. With the technological advancements of the last decade, music buffs can now access sweet beats whenever they wish. Here are the most popular gadgets people use to listen to their music: 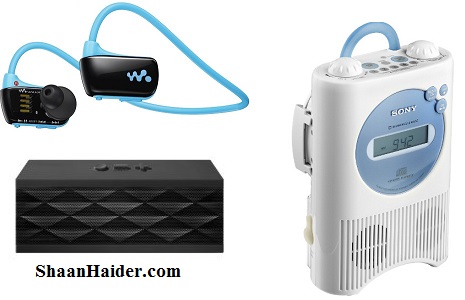 Best Gadgets to Listen to Music

Since today's smart phones all boast streaming music and video players, we're never without our favorite tunes. In addition to the iTunes store and other stores that publish music online, there are also free mobile music services like Pandora and Spotify. Most of us have our phones with us all of the time so listening to music on the go has never been easier.

Let's turn up the volume with headphones that double as a music player. The Sony Waterproof Sports MP3 player rests comfortably and securely on your ears, allowing athletes (particularly swimmers) to move freely. This nifty nano technology is sure to make waves for both athletes and traditional music consumers.

Do you remember when Apple released the very first iPod? It's been almost 12 years since the first model. These days, there's a plethora of iPods on the market. Here are just a few popular versions:

• iPod Touch is superficially identical to the iPhone. It also allows users to enjoy most of the same key features that the iPhone offers. For music, its internal flash memory can store up to 3,500 songs!

• iPod Nano boasts Bluetooth, as well as easy-to-use controls that quickly adjust volume, or play, pause, and change songs. Playing videos, FM radio, and over 30 hours of music playback. It's a great gadget for the serious songbird.

• iPod Shuffle is the smallest and most convenient of all Apple mp3 players. Just an inch long and an inch wide, it's wearable with a clip and uses a control pad for playing songs. Although the little gem only has 2GB, it's an essential for music lovers always on the go.

Not everyone worships Apple products. For those people, there are dozens of other excellent MP3 players on the market. Sony, Scandisk, and Coby all make high quality products. Some boast features that aren't even available with Apple products, it's no wonder so many music enthusiasts have started making the switch.

Since your voice may not be music to your roommates' ears, you may want to consider some shower tunes via a waterproof radio. Shower radios were all the rage in the 1980s, and they're still kind of cool now. Brands such as Sony, Zadrow, and Pollenex won't let your 20-minute shower get in the way of some morning music.

We've seen the cool kids using these nice portable speakers everywhere: at pool parties, at the beach, and even at community kickball leagues. Whether it's a set of small water-resistant speakers or a foot long sound bar, you'll surely be the life of the party wherever you go.

What are some devices you use to listen to music both in and outside of your home?