Recently, we have seen a number of amazing handsets that are launched by big players of the mobile world. Among them, iPhone 5, Samsung Galaxy S3, and Nokia Lumia 920 are among the favorites of all mobile lovers. All three big mobile companies’Apple, Samsung, and Nokia have one handset, which is preferred much in the mobile market. However, you may find difficulty in choosing one, if you have all three in your mind. Thus, it is better to have a quick comparison between these three handsets. 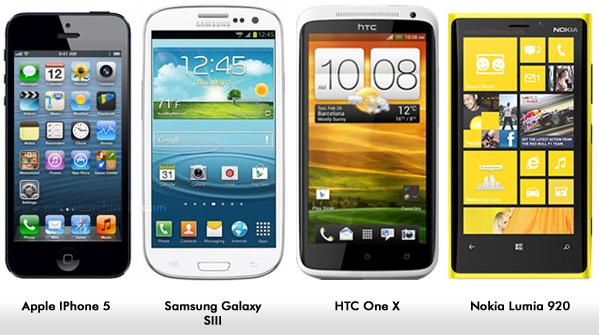 You will find Microsoft’s latest version of Windows Mobile OS in Nokia Lumia 920. It is a Window's phone with ‘Live Tiles’ interface that has changed much as compared to previous version. The iPhone 5 will have latest iOS 6, which is the next generation OS by Apple Inc. You will find Passbook, new e-ticket app, mobile app of Apple, and plus Facetime over 3G in this brand new handset by Apple. The Galaxy S3 has Android 4 i.e. Ice Cream Sandwich. However, this time it is with Touchwiz, Sense 4.0, and custom user interface.

Nokia Lumia 920 has opted dual core S4 chip which is clocked at 1.5 GHz. For the processor, Samsung has Exynos 1.4 GHz quad core for their users. The Apple also adheres to Nokia in the matter of processor; two cores are inside the Apple A6. You will get twice the speed of CPU as well as graphic power with iPhone 5. The chip is quite smaller that support better battery life for the users.

If the matter is of size, only iPhone 5 resists the idea of truly huge screen; the 3.5 inch screen is replaced with 4 inch 16:9 version. All three screens are pretty impressive with iPhone 5 display clocking 326 ppi, and Samsung 306 ppi. In Nokia Lumia 920, you will find ‘Nokia Pure-motion HD+’ that is supposed to offer better screen performance that HD.

You will find 32 GB on board storage with Lumia 920, which is backed up by Microsoft’s cloud storage called SkyDrive. The Samsung Galaxy S3 will have MicroSD support above 16/32/64 GB internal drive offered by Samsung. The new iPhone 5 will have same internal memory as of Samsung’s S3.

It is being said that Camera department will be a trump card for Nokia, which is bringing PureView tech with Carl Zeiss lenses. This function is placed above 8 MP sensors with 1.3 MP front Camera. The Samsung Galaxy S3 come up with 8 MP rear sensors, 1.9 MP sensors for front Camera, and burst mode that enable the user to take tons of photos in a single go. The camera in iPhone 5 is smaller so that it will be physically fit into new model. It is also 8 MP and almost same as of iPhone 4S.

This is a comparison among the above three handsets that can give you a quick idea about the specification of each handset. All three are good; however, the selection always depends on the preference of user for functions and specifications.

Wanna Embed This Infographic On Your Site? Copy & Paste The Code Given Below In Your Post