Nokia Lumia 930 is Nokia’s latest flagship device and it is the best Windows Phone device yet as well. It comes as a complete package in terms of software and hardware to fight against the high end and best smartphones of other brands.

I was trying my hands on the Nokia Lumia 930 since last few days and now I am going to share my experience with the device. The hands-on review of Nokia Lumia 930 is covered in various sections covering each aspect of the device and its pros and cons. 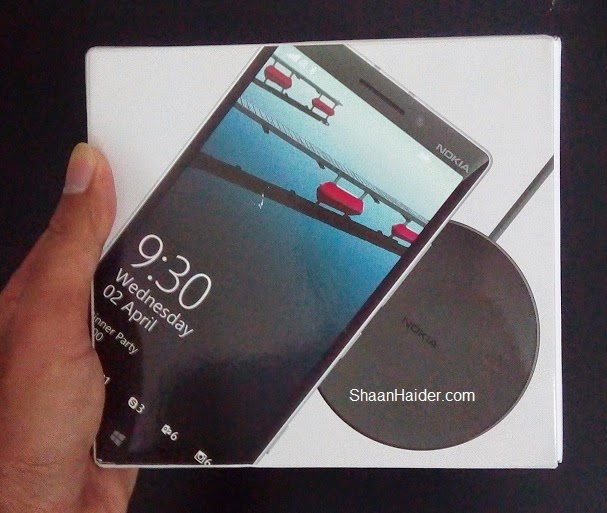 Nokia Lumia 930 comes in a regular size retail slide open box. Inside the box you will find the Lumia 930 with an AC charging adapter, USB cable, the wireless charging plate DT-900 and some user manuals.

Once again like Lumia 1020, there is no headset provided in the retail box and you will need to buy one or use an existing one to listen the music and all.

Nokia Lumia 930 sports a 2.2 GHz Quad-core Krait 400 Qualcomm MSM8974 Snapdragon 800 chipset and Adreno 330 GPU. You may find that the chipset is a bit old now and doesn’t compete with the latest flagship devices of other brands as they are coming out with the latest SoC.

To support this chipset, there is 2GB of RAM which is good enough for the Lumia 930 as the Windows Phone devices are less resource hungry and perform well even with less RAM.

Nokia Lumia devices are having a particular design which makes them different than the other devices. When it comes to Lumia 930, the design is really good. Thanks to the bright orange and green colors, it's a head turner for sure.

Nokia Lumia 930 comes with the aluminum frame covering the sides of the device. There is no sharp corners or cuts on the metal frame which gives it a beautiful and elegant look. The microUSB port is at the bottom and the the mini SIM slot is on the top along with the audio port. I loved the stripes around the microSUB and audio ports, reminds me of my favorite muscle cars Ford Mustang and Dodge Challenger.

The volume rocker, power on/off button and camera keys are all one side of the device, so you can easily use them all with just your thumb. There are two microphones on the back and one in the front , right below the Windows logo. There is just one speaker placed on the back of Lumia 930. The camera and dual-LED flash are placed side by side at the top of the back panel.

The back panel is made of polycarbonate and comes in four colors – Black, White, Bright Orange and Bright Green. The back panel is non-removable which I really do not like. Also, there is no memory card slot in Nokia Lumia 930 which is another big drawback of this device.

Nokia Lumia 930 is strong, sturdy and durable not just in looks but also in real. In just few days of usages, I have checked its strength in various ways and each time Lumia 930 came out as a winner in terms of build quality and strength.

Nokia Lumia 930 comes with 5-inch ClearBlack AMOLED display of 1080p full HD resolution which makes it the best display among Nokia phones. The 5-inch full HD display is protected from the scratches and minor wear and tear by Corning Gorilla Glass.

The pixel per inch you will get is obviously 441 for a 5-inch device but the ClearBlack display of Nokia Lumia 930 makes it a better one. You get sharp display and deep black depth with great contrast on Lumia 930.

The sensitivity of the display is very nice and you can easily use it wearing gloves, though you need to turn on the high sensitivity option from the settings. The sunlight readability is amazing and I had no issues in using it outside in the bright sunlight of Saudi Arabia.

Nokia Lumia 930 comes with the latest version of the Windows Phone 8.1 OS – Lumia Cyan which is having some great features for sure though it lacks on some ends. One of the highlighted feature of this device is obviously Cortana, the personal virtual assistant made by Microsoft for Windows Phone users.

You can create live folders on Start screen, use Quiet Hours to block calls and messages for a pre-defined time interval, use the Action Center to see the notifications, double tap on the locked screen to wake it up, sync and backup your data like contacts, texts, settings, images and videos etc.

Windows Phone 8.1 supports the installation of apps from the memory card. But since there is no memory card option in Nokia Lumia 930, you cannot install games or apps if you transfer the XAP file to its internal memory which is really bad. Also, the dedicated file manager lacks lots of feature. But since Windows Phone OS is still in early stage and improving a lot, we can expect it to be better in the next updates like Lumia Denim.

To be honest, I just loved the Cortana on my Nokia Lumia 930. She is really smart, got great sense of humor and the best smartphone virtual assistant. Though, Cortana is not available to all countries yet, you can get Cortana on your Windows Phone in any country using the tricks shown in the below video.

One of the best thing about any Nokia Lumia device is the camera and imaging. And Lumia 930 is not an exception. It comes with a 20 MP camera having the Carl Zeiss optics, optical image stabilization, dual-LED flash, 1.2 MP front camera and bunch of amazing Nokia imaging apps.

There are two cameras in Lumia 930 – Nokia Camera and a general one. You can select the default one for you. Nokia Camera comes with the Smart Camera which let you capture action shots, select best shot, change faces in an image and other interesting features. Also, there are lots of Nokia Lumia imaging apps like Nokia Storyteller, Creative Studio etc to edit your images and make them more interesting.

The optical sensor size in Nokia Lumia 930 is exactly half of the Lumia 1020 and so the number of megapixels. You get images in 4992 х 3744 pixels and the rear camera is able to take full HD 1080 videos. The images taken by Lumia 930 comes great in quality, thanks to the PureView technology used by Nokia.

The full HD 1080p recording is not so brilliant and only average in quality. It let you record videos with stereo sound at either 30fps, 25fps or 24fps. It is sad that Nokia decided to bring the 4K video recording in Lumia 930 with Lumia Denim update when the hardware is totally capable of doing it right now. The front camera can also take 720p HD videos.

One big drawback here is the lack of a nice panorama app. You can use the Lumia Panorama app but it sucks big time. Also it lacks a 360 degree imaging app like Android’s Photo Sphere. Though you can use Microsoft, Photosynth but it also not good in quality. If you are iPhone user, you are also going to miss the iPhone's SloMo video recording here on Lumia 930.

I have also felt that the back of Lumia 930 get hotter if you use camera for more than few minutes continuously which is not good if you love to take lots of photographs from your smartphone.

One thing where any Windows Phone scores negative is smartphone apps and games. If you are an Android or Ios user, you will not find all of your favorite apps or games here in Windows Phone Store. But talking particularly about the gaming performance of Nokia Lumia 930 for the available games, it performs well.

The processor, GPU, RAM and display are good enough to provide you a great gaming experience. You will not feel any lag while playing the games and Dolby Digital Plus sound enhancement is good for playing games with your headphones on.

If you need to send a text or make a call while playing the game then, you can leave the game in the middle, finish the task and resume the game. 2GB RAM takes care of that your game does not close while you just make an important call.

But one big issue I have faced with Nokia Lumia 930 while playing games is that the back panel heats up a lot near to the speaker and the metal frame. Though it is a common thing while playing HD games and you will feel the same on many other high end phones like Samsung Galaxy Note 3, Moto X etc, it’s a bit quicker and hotter on Lumia 930 which is a drag.

Lumia 930 comes with the Nokia Mix Radio which is personalized music station and the 5-inch full HD ClearBlack display is perfect for watching videos. The Dolby Digital Plus sound enhancement really enhances the overall experience. But it drains battery a lot and also heats up the device.

As I have already said, the chipset used in Nokia Lumia 930 is a bit old but it doesn’t disappoint you in terms of performance in any way. You will feel no lag even though you are a heavy multi-tasker and use multiple apps at the very same time.

In the Antutu benchmarking test, Nokia Lumia 930 scored a huge 26211 points which is the best Antutu score yet for any Windows Phone 8.1 device. Nokia Lumia 1520 scored 25628 though it is having the exact same specs.

The reason behind this is that Nokia Lumia 930 is having a smaller screen, so it is having better resolution and PPI (pixels per inch). Due to this it scored over the Nokia Lumia 1520 which was the best Windows Phone device till now following the Antutu score.

Nokia Lumia 930 comes with a non-removable 2,420mAh battery. The battery performs pretty good for normal usages and the standby time on 3G is impressive too. If you make few calls, send texts, take few pictures and videos, few hours of music and moderate Internet browsing then Lumia 930 battery stands for a day easily.

But once you start playing games, watching HD videos or using camera for long it drains so fast and won’t stand more than half a day. Continuous web browsing or watching videos will drain your battery in around 7 hours easily.

There is a Battery Saver option inside the settings but if you are a heavy user or in need of using your Nokia Lumia 930 a lot on any random day, your battery will need to be charged frequently. Seems Nokia knows about it too as they provide the wireless charging plate with Lumia 930 which is a must have for a device with battery life like this. But still it does not hides the fact that Lumia 930 does not score much for battery life.